In a time of high tensions, Saudi Arabia's air defences are at their weakest in decades.

Iran's future with Saudi Arabia is uncertain, but one thing we know for sure is that it's not friendly. I've talked extensively about Iran's ability to defend against Saudi Arabia, but with the Kingdom buying a large force of THAAD and PAC-3 interceptors, it is necessary to discuss the Saudis' ability to defend as well. I touched on Saudi air defences briefly in a previous blog post, but I have decided to go into the subject in more detail. Indeed, I will go into more detail than I did for the Iranian air defences. OPSEC for the Saudis does not concern me.

As of late 2018 the main changes in Saudi Air Defences had been in their positions, with somewhat more of a focus towards trying to intercept Yemeni ballistic missiles en route to and at their intended targets. However in the most up-to-date Google Earth imagery, Saudi Arabia appears to have drastically drawn down its deployment of Patriot batteries, with only 5 systems operational. This is an unexpected development that could be due to one or a combination of factors; However, it is possible that due to recent tensions, the Saudis may have reactivated their remaining Patriot systems. Google Earth imagery is typically 2-3 months old.

UPDATE 23/09/2019: I had missed a Saudi Patriot site at Abqaiq. This was found after the strike at the oil facilities there on 14/09/2019. There are two Patriot Sites here, one of which was occupied before the attack. The second site was activated post-attack facing North and now both are presumed to be occupied. Additionally, updated satellite imagery for the Patriot site marked "Dhahran N" shows the site to be currently unoccupied. The coordinates for the Abqaiq sites are as follows: 25°56'27.47" N  49°43'57.03" E for the site active during the attack, and 25°53'58.55" N  49°38'00.32" E for the site activated after the attack. Updated imagery for this site is not yet available from Google Earth. More on the Abqaiq attack at the bottom of the blog post.

Please bear in mind this update when viewing the rest of the blog post with respect to the 2019 Coverage, which has not been updated since May.

***
The current Saudi posture makes them extremely vulnerable to Iranian ballistic missiles - it is notable that the Patriot system has only a 20 km range against ballistic targets (more on that in Systems Breakdown). There are vast swathes of unprotected strategic areas like the oil facilities in the Eastern province. This includes Saudi Arabia's main oil export terminal at Ras Tanura. Ras Tanura is Saudi Arabia's largest terminal; it can handle 6.5 million barrels of oil a day, and store up to 33 million barrels. The nearby Ju'aymah terminal is afforded a single Patriot battery.  Yanbu in the West (at the Red Sea) is also unprotected from BMs - it has a loading capacity of 6.6 million b/d. and total crude oil storage capacity at the terminal is 12.5 million barrels. Most of Saudi Arabia's airbases are also unprotected from ballistic missiles. 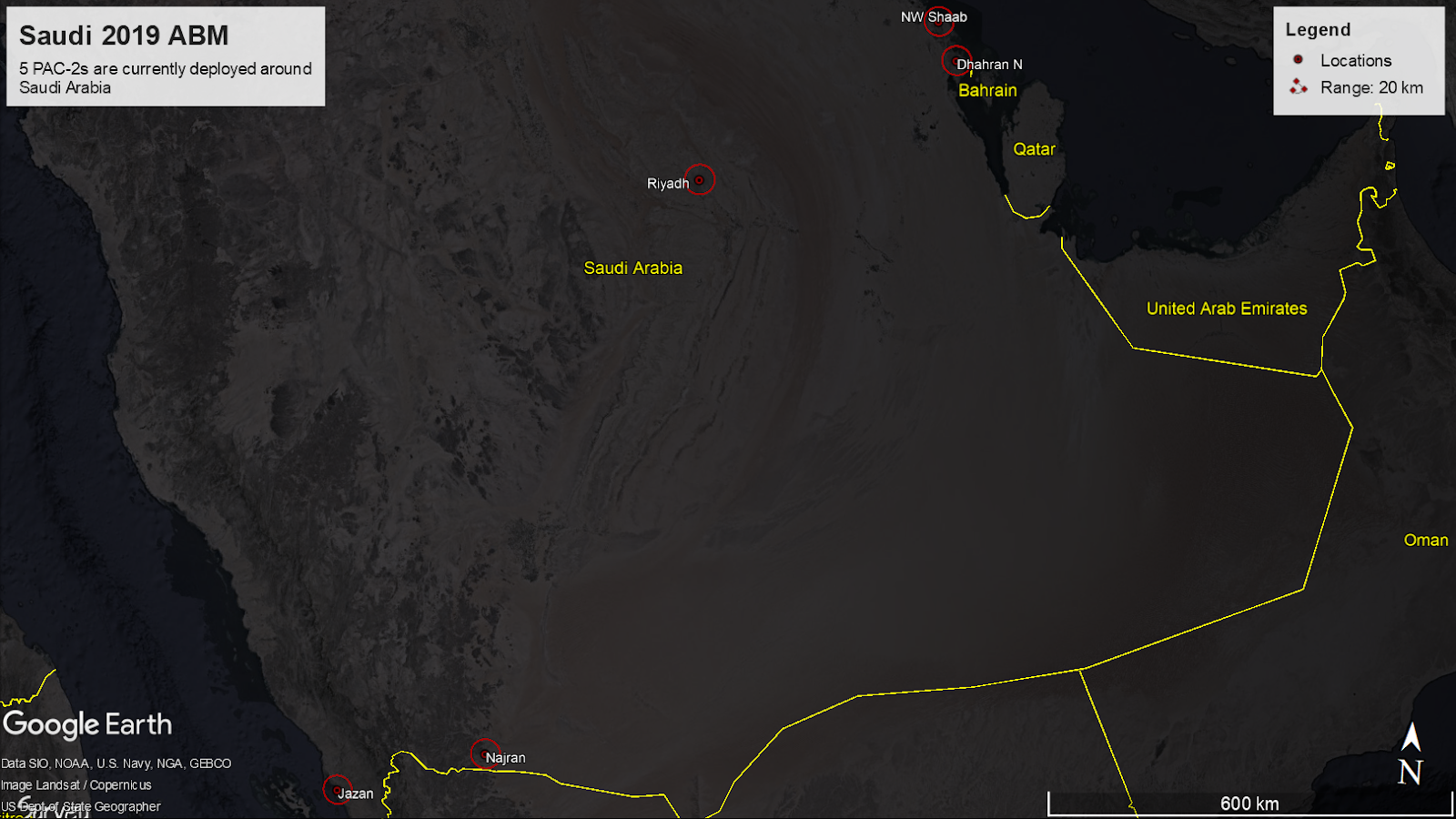 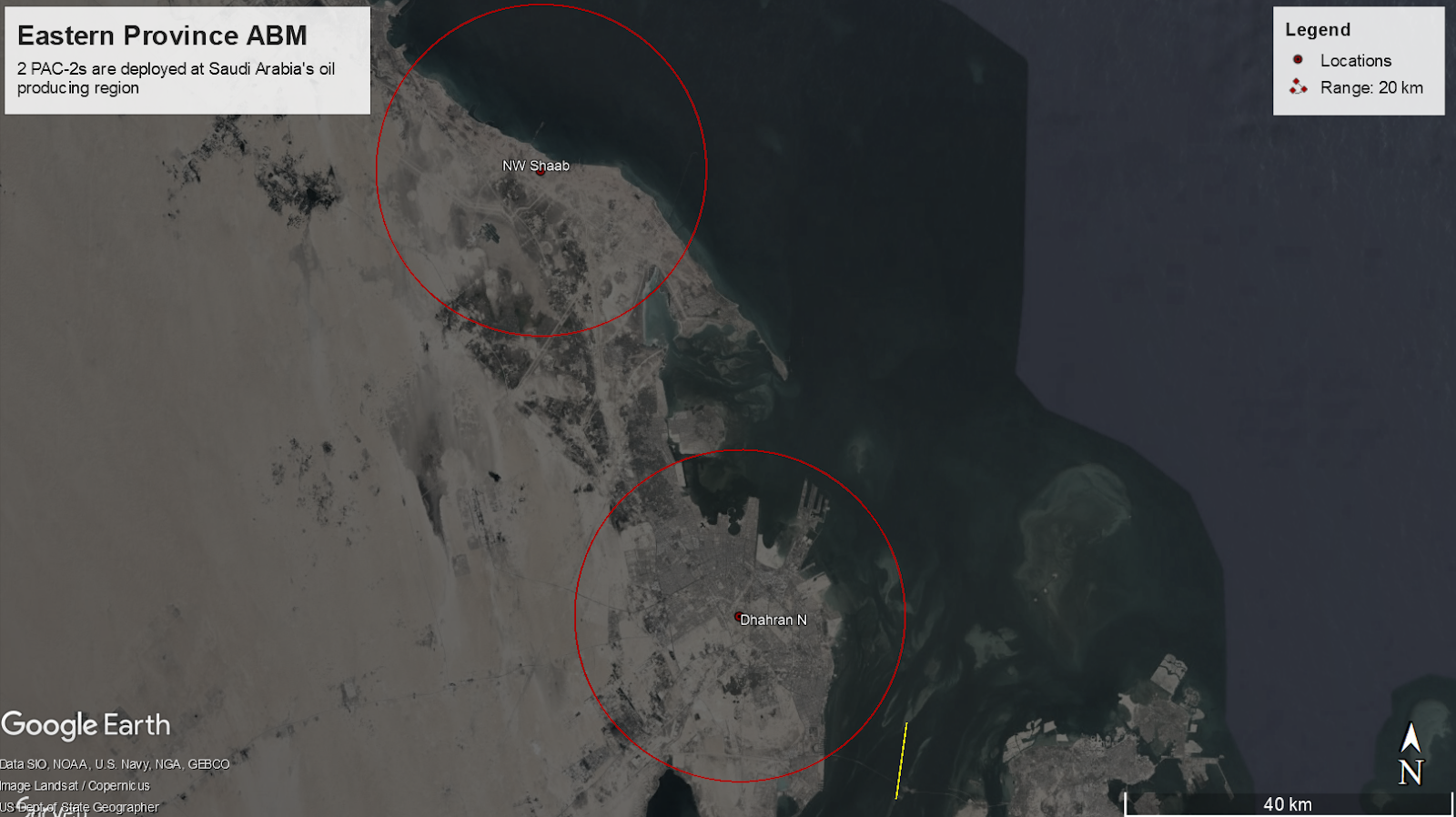 Saudi Arabia's defences against aircraft remain robust - just like Iran, they rely on a large number of Hawk systems for medium-range defence, and their Patriot batteries' 160 km range against aircraft protects facilities from standoff munitions. The Saudis also have a sizeable air force with powerful aircraft such as the F-15C/D/SA and the Eurofighter Typhoon. Their extensive ground based radar network is backed up by E-3 AWACS.

The Hawk is the mainstay of Saudi medium-range SAMs. They are used to cheaply protect points from low-medium capability aerial threats. The Saudis have the I-Hawk version with a range of 45 km but no capability against ballistic missiles. The Hawk is dotted all around Saudi Arabia, most notably at sites where the Saudis didn't deem important or threatened enough for a long-range Patriot system. This includes the city of Jeddah, a handful of airbases in the West and South of the country, as well as KKMC (King Khalid Military City), a large city with a population of 65,000 built by the US for Saudi Arabia, designed to hold soldiers intended to defend Saudi Arabia against Saddam's Iraq.

The primary reason why these bases are not afforded the highest tier of Saudi Air Defence protection is the feeling that they would not be targeted by Iranian missiles in a potential war. Jeddah's most important military target is its status as home of the Saudi Navy, whose ships would be hard to hit with long-range ballistic missiles. The airbases are less important than the ones in the North and South, which are close to potential threats. And KKMC's main use as an army base is less relevant seeing as Saudi Arabia currently has no peer enemies on its border. Saudi has instead chosen to concentrate its high-tier coverage in more important areas, leaving the Hawk systems to provide a basic overall level of defence. 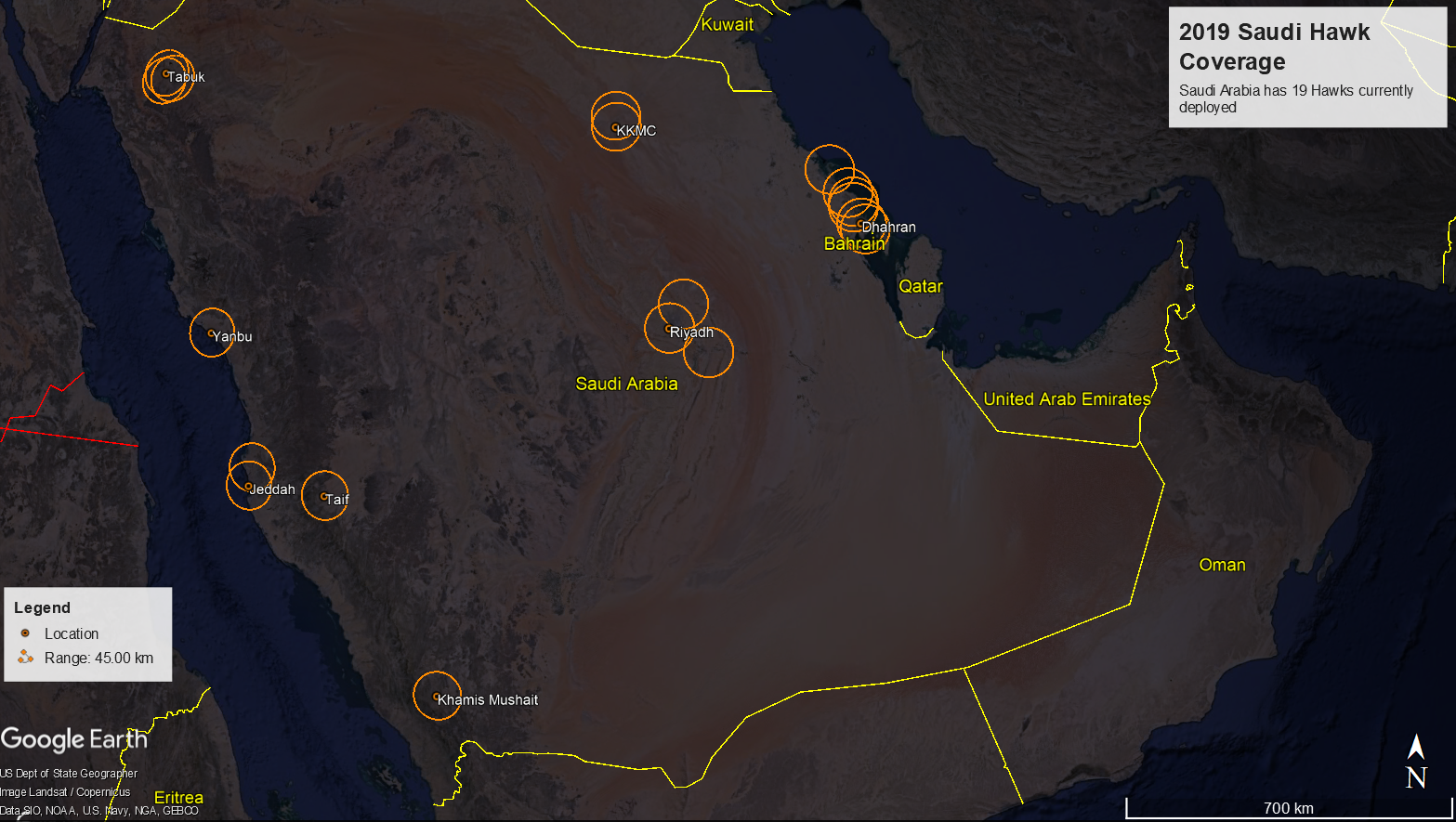 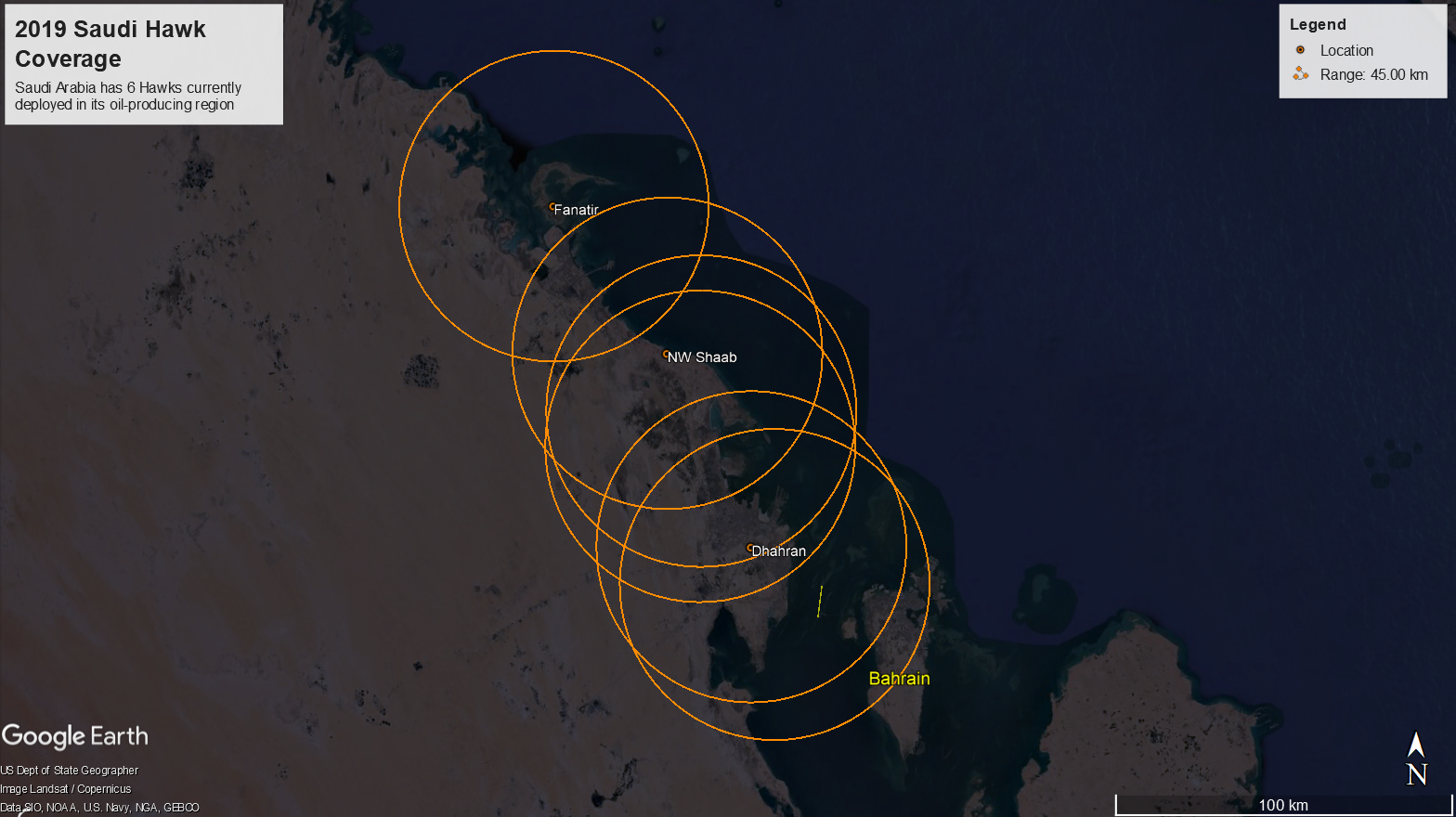 The Patriot PAC-2 is Saudi Arabia's only long-range air defence system. It can destroy aerodynamic targets at ranges up to 160 km, and a range of 15-20 km against ballistic missiles, according to a NATO factsheet. As if Iran's air force wasn't comparatively weak already, it turns out the Saudis have a strong defence against them even without their large and growing air force. However, in independent analyses, its performance has proved quite poor against Houthi Burkan-2 missiles, which are relatively basic designs compared to the manoeuvring warhead designs that Iran possesses. Not to mention the poor welds.

Patriot PAC-2s should have a low Pk against Iranian ballistic missiles, which may be the reasoning behind Saudi's purchase of advanced systems like THAAD. However, this sort of mindset is so dangerous that the Americans and Soviets signed the ABM Treaty to prevent the wild arms race between ABM systems and ICBMs running out of control as each superpower tried to preserve its deterrent and prevent the other from having a first-strike capability. When America withdrew from the ABM Treaty in 2002, Russia assumed this was the US trying to erode Russian deterrent. Iran has to assume the same with Saudi Arabia, especially considering MBS' willingness to intervene militarily in Yemen.

I have not included the Shahine system's range rings on my maps, as it is a SHORAD (Short Range Air Defence) system and its range is so short that the range rings would be redundant. Shahine is a variant of the Crotale system, with 6 missiles per (AMX-30 based) launcher. It provides Saudi Arabia with the capability to intercept cruise missiles, but are deployed in relatively small numbers. Cruise missiles like the recently unveiled Hoveizeh LACM would still be hugely beneficial for Iran's offensive capability.

Because of the Houthi retaliation to their intervention in Yemen, the Saudis have changed their air defence posture significantly. Therefore, I decided to include this analysis of Saudi Arabia's capabilities in 2014. This will reflect typical Saudi deployment priorities. The only new system introduced is the lone PAC-3 battery, which means in terms of the quality of deployed systems this section will still be quite relevant to Saudi's immediately available maximum capabilities.

The vast majority of Saudi air defences are concentrated around the main hub of the Saudi economy, in Dhahran and Al Jubail. Riyadh also has comparatively strong defences compared to the rest of the country, which mostly have Hawk systems. Saudi's typical ABM deployment is much denser than its current posture, and is heavily focused around defending socio-economic centres. The bulk of Saudi ABM cover is around oil-rich Dammam on the Persian Gulf coast. A couple of systems are deployed at Riyadh, with the only purely military site being at Tabuk, which hosts a major Saudi airbase. However, the PAC-2 which makes up the majority of deployed systems, has been shown to fail before, even against basic Scud-type short range missiles. It would certainly be less effective against MaRV missiles like Zolfaqar and MRBMs like Emad. However, the positions of the systems would be useful for determining future positions of systems like the PAC-3 and THAAD, which Saudi Arabia has purchased but not received delivery of yet. 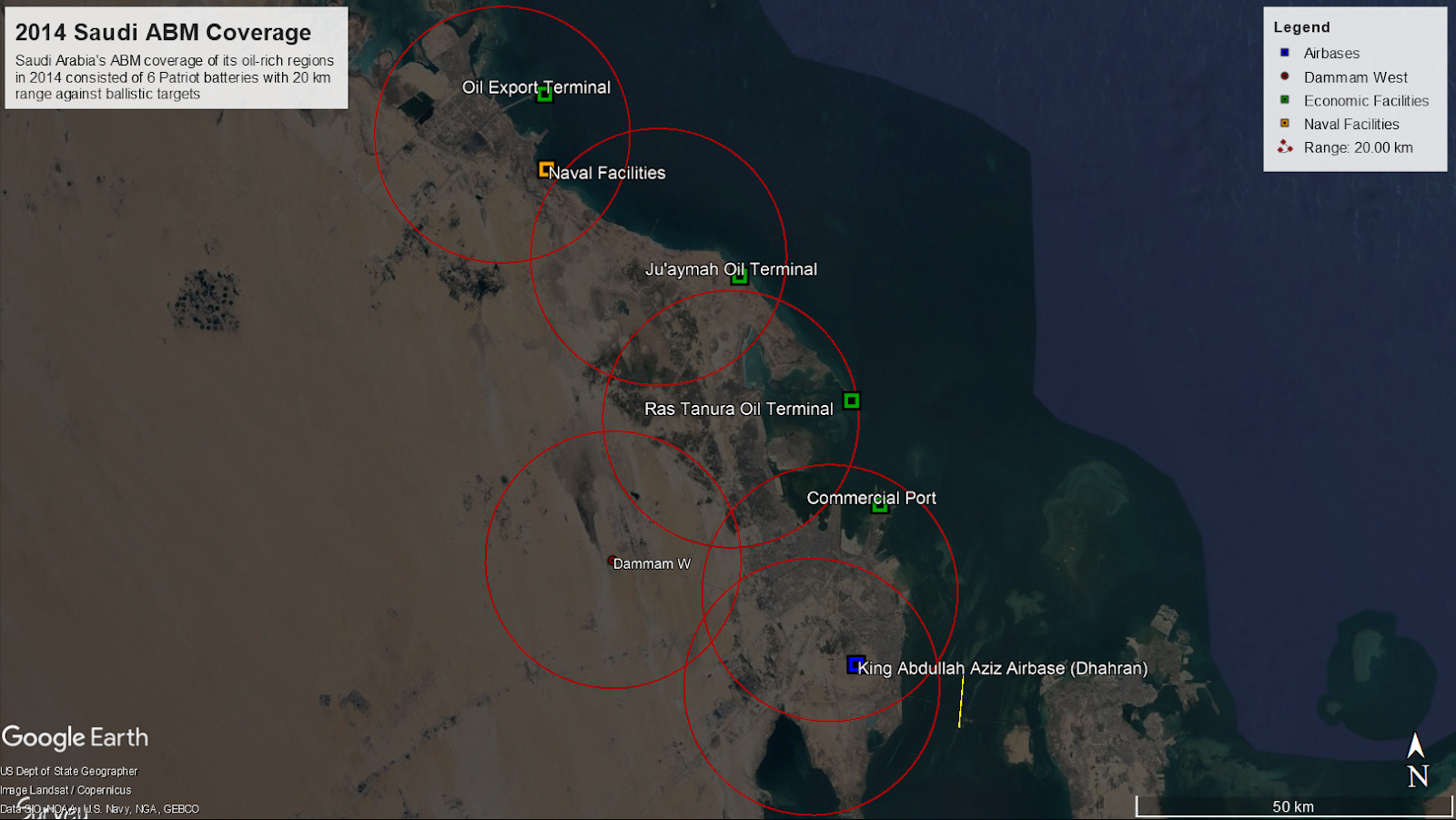 Saudi Arabia follows a point defence strategy, with its socio-economic centres being afforded the most capable defences. However, most airbases are not afforded ABM protection, and some key facilities such as missile bases are usually unprotected. While Iranian aircraft would only have a narrow clear corridor south of Kuwait, due to the terminal-phase protection of current Saudi ABM Iranian missiles would be able to fly over the defended area in Saudi's Eastern province. Saudi Arabia has plans to extensively improve its ABM capabilities. This come in the form of its purchase of a $15 billion worth of THAAD interceptors, and a large purchase of 600 PAC-3 missiles with unspecified numbers of modification kits for their existing Patriot launchers.

Using a more detailed DSCA release in 2014 - which included 202 missiles with 36 'Launcher Station Modification Kits' (LSMK) - we can take a single LSMK to mean the replacement for a single M901 launch cell. This would mean the 2014 PAC-3 purchase was enough for 9 TELs. This is probably in the form of 6 actively deployed TELs (6 TELs per system is the standard Saudi deployment), with 3 as spares. Each system would therefore have 96 PAC-3 missiles immediately available, and could be fully reloaded once, with the 106 spare missiles. 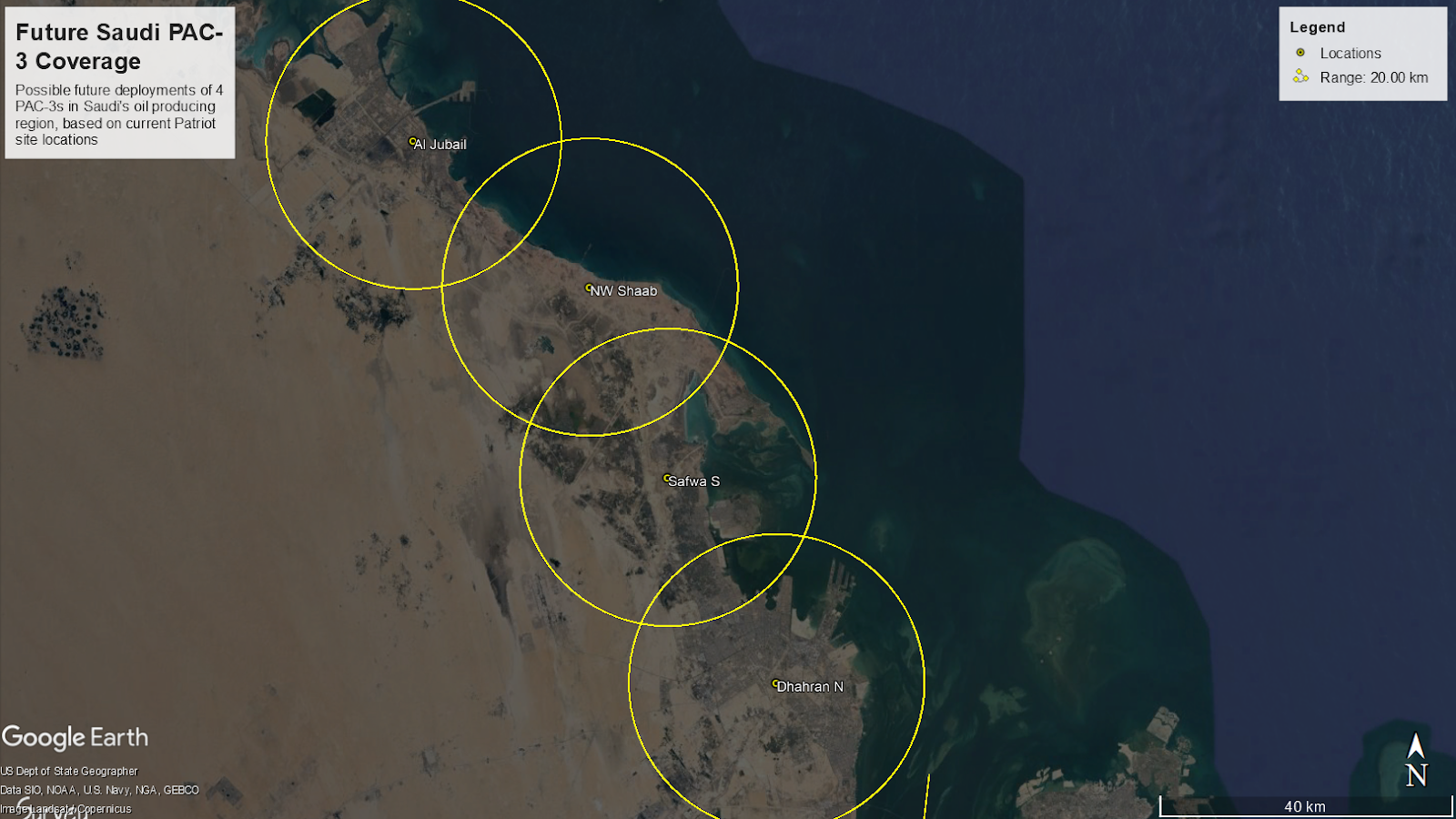 Saudi's THAAD purchase was more clear cut, with the DSCA publication detailing that there would be 360 missiles, 44 launchers, and 7 radars. Using the 6 TEL rule, that would mean 7 THAAD systems (matching up with the radars) with 2 spare TELs. However, with 8 missiles per THAAD TEL, there would be only 8 spare missiles, meaning effectively no battery reloads. Despite this, THAAD would be a very strong addition to the Saudi arsenal. It is capable of intercepting MRBMs at 200 km range and 150 km altitude, making it a capable area defence weapon. However, because it is exclusively exo-atmospheric, it can not defend against quasi-ballistic missiles like the Fateh family (including 700 km Zolfaqar and 1000 km Dezful) which fly within the atmosphere. 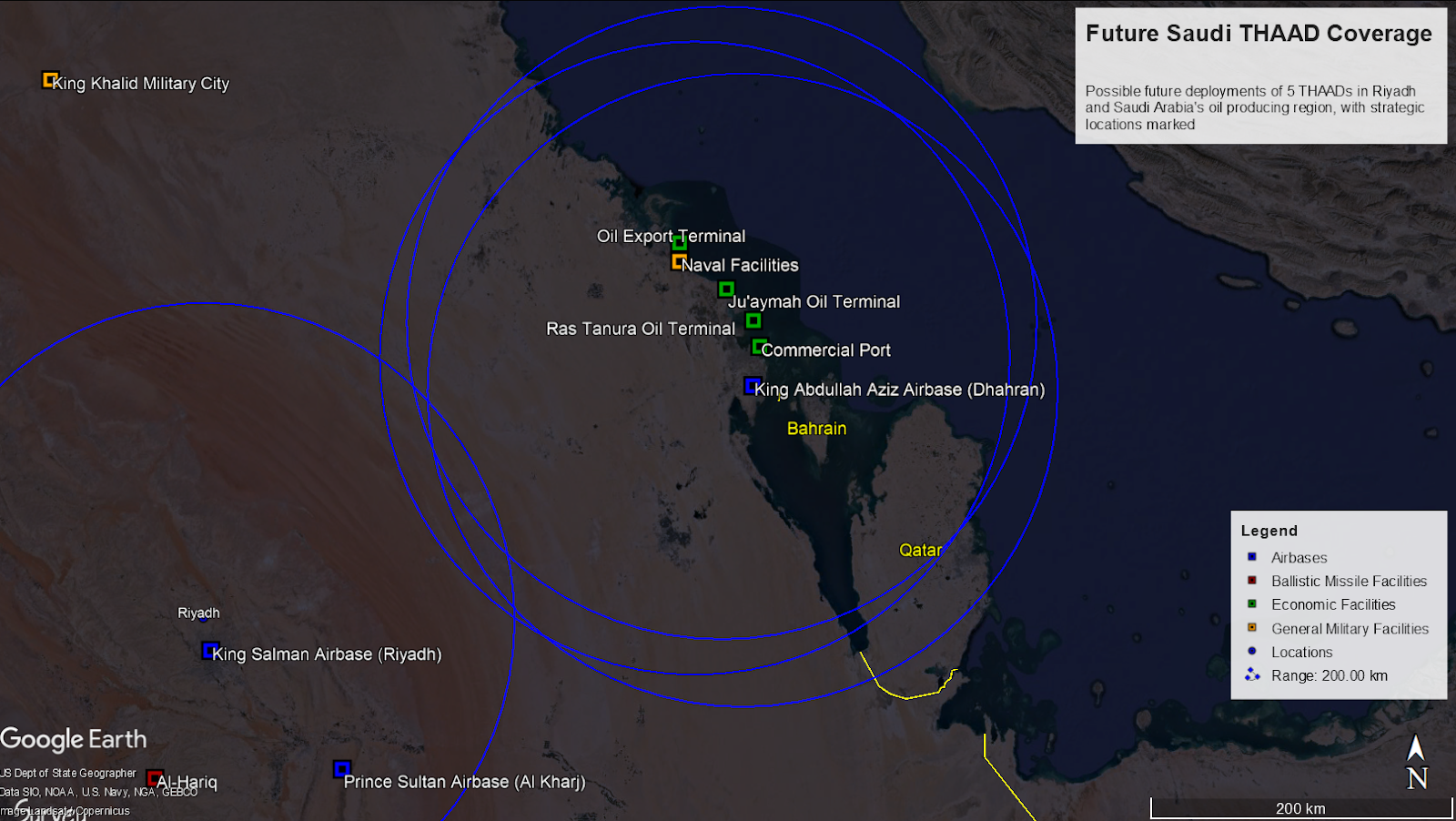 It is clear that Iran will want to match the Saudis' missile defence upgrades. This will likely come in the form of fleet-wide MaRV upgrades to Iranian MRBMs, that are already becoming apparent in the Emad, Ghadr and Khorramshahr missiles. Iran will also undoubtedly try to overwhelm Saudi defences with sheer numbers, both in missile quantity and warhead type - the latter becoming apparent in the Khorramshahr's MRV/MIRV warhead option. Further advancements like Hypersonic Glide Vehicles (HGVs), more advanced MaRVs with gas thrusters, and penetration aids could help defeat future Saudi ABM. Furthermore, Iran's progress in cruise missiles is an option to exploit Saudi's small force of Shahine SHORAD.

I have provided a link to a download for the kmz with coordinates of all sites. This file must be opened with Google Earth Pro: https://mega.nz/#!jmJ2gQgS!dDmFpHcCj6miNYWs_oJ-O6YNN5xbDmlkyzElGqbzRjY

Eastern and Central Saudi defences following the Abqaiq attack. Note: potential coverage drawn as circles, actual direction air defences pointed at determines radar and missile coverage. Of the two Patriots at Abqaiq, one is pointing South and the other points North. 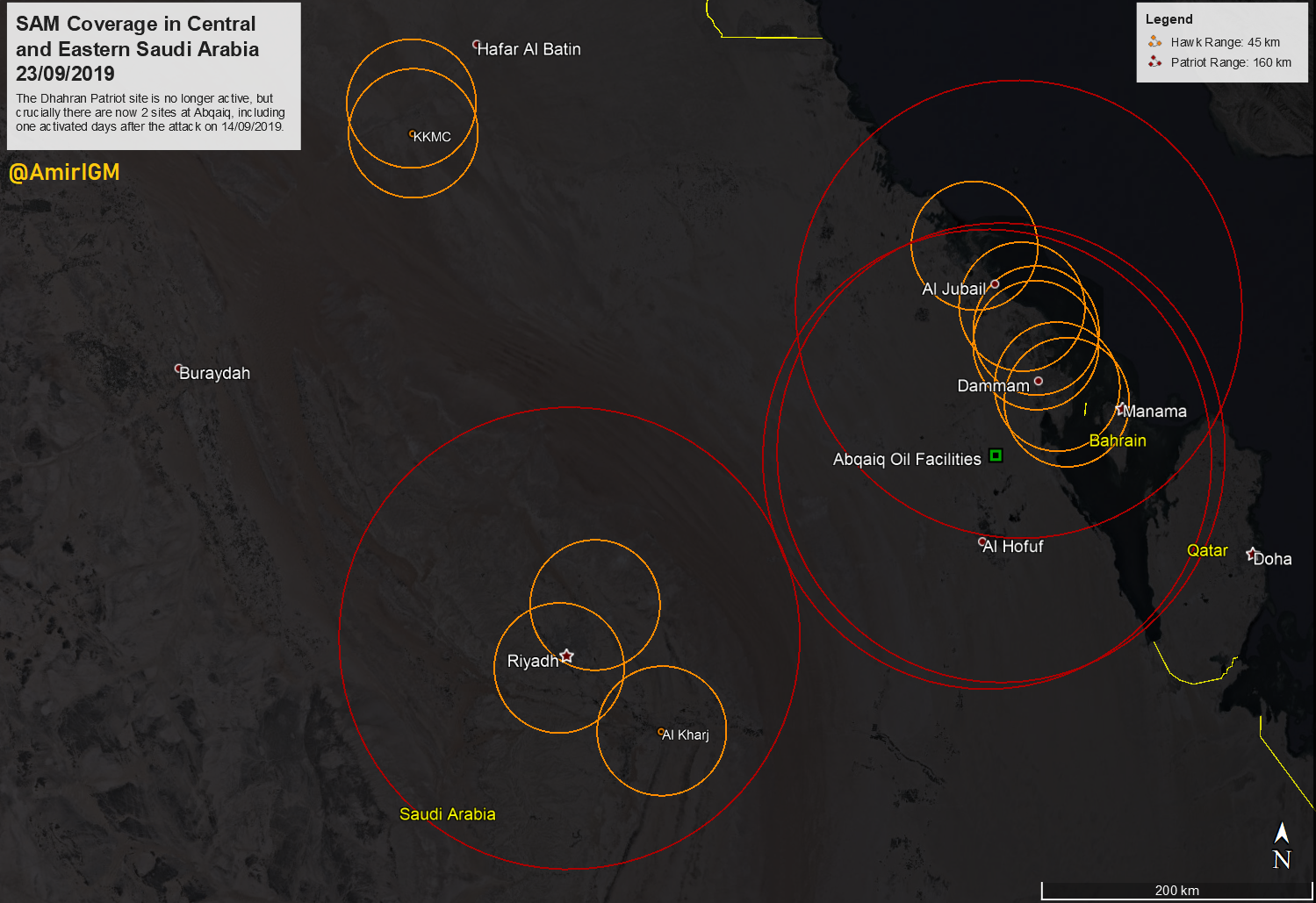 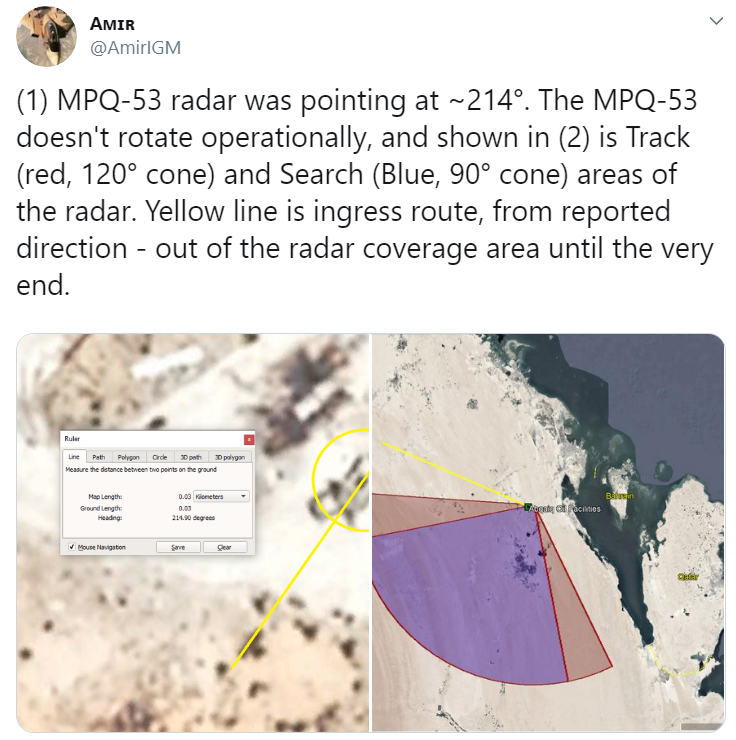 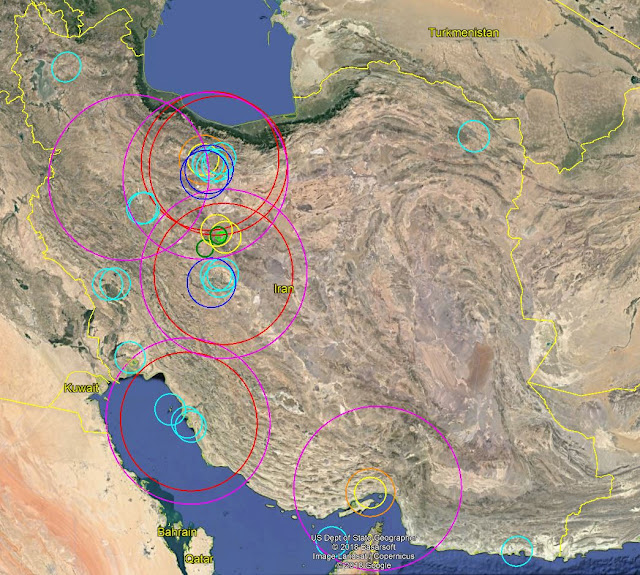 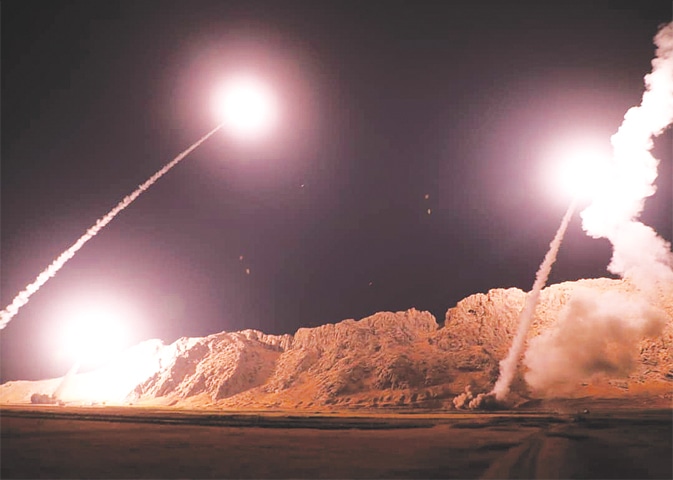 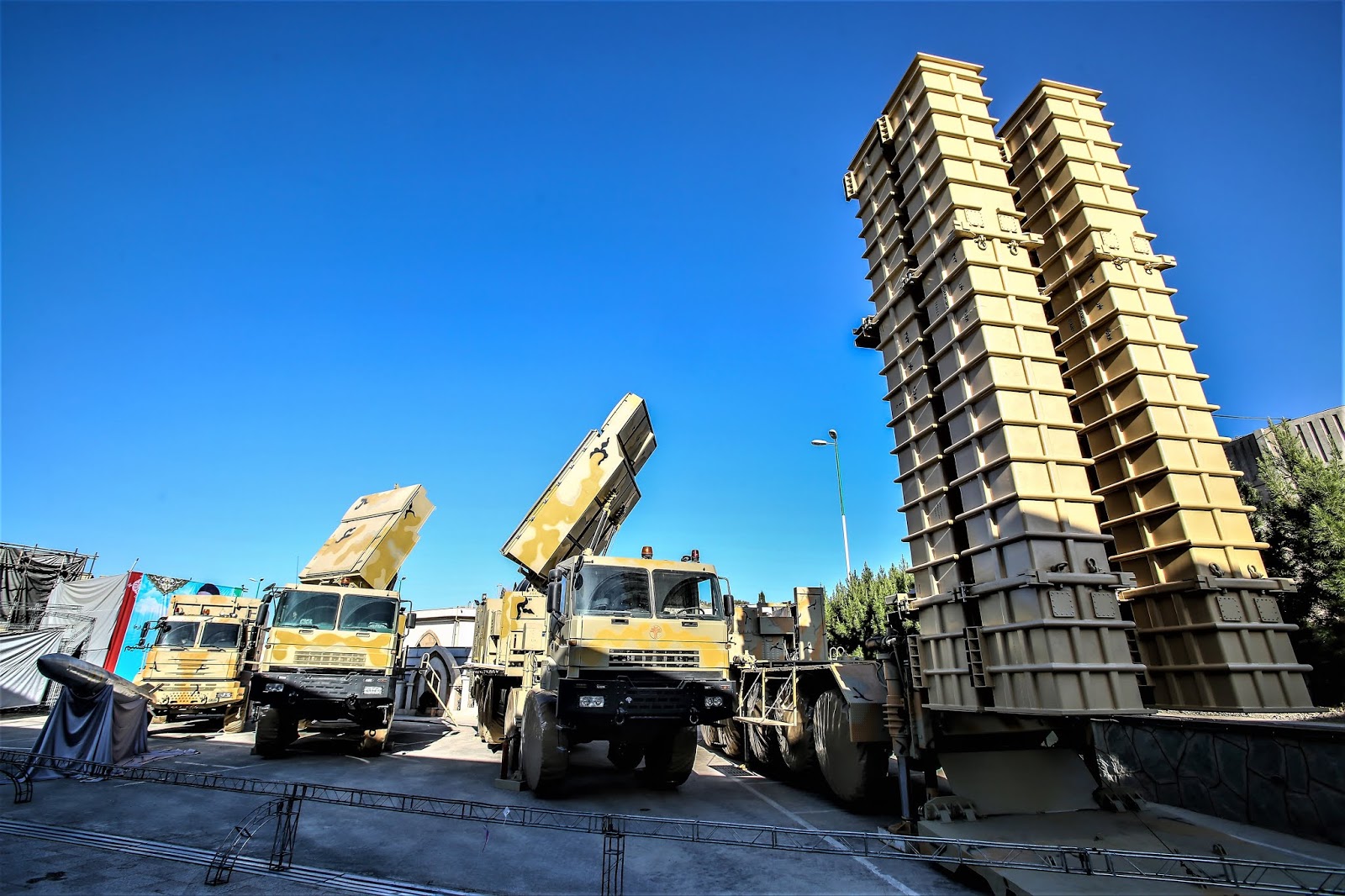 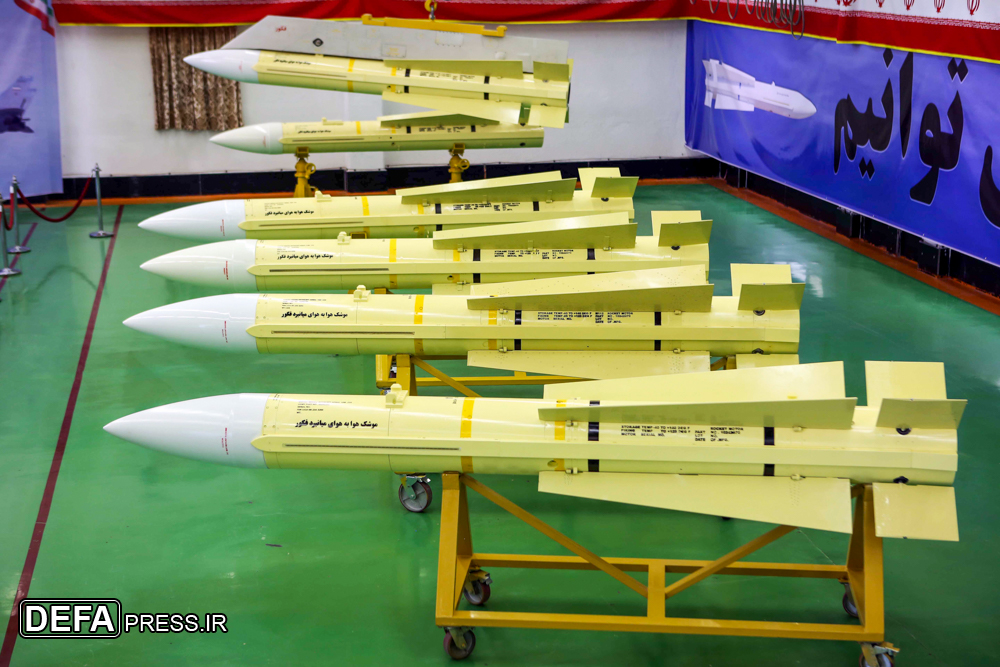 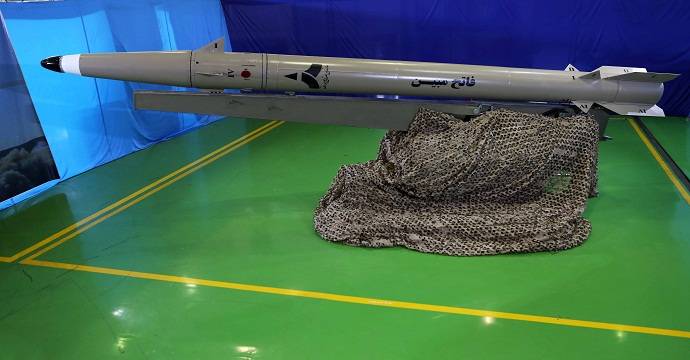 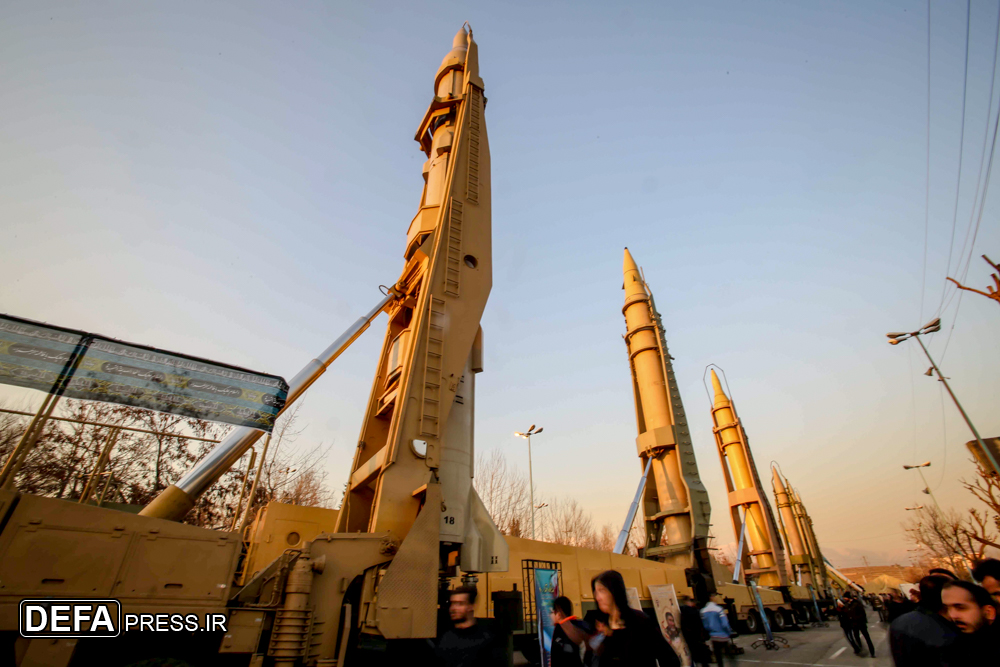 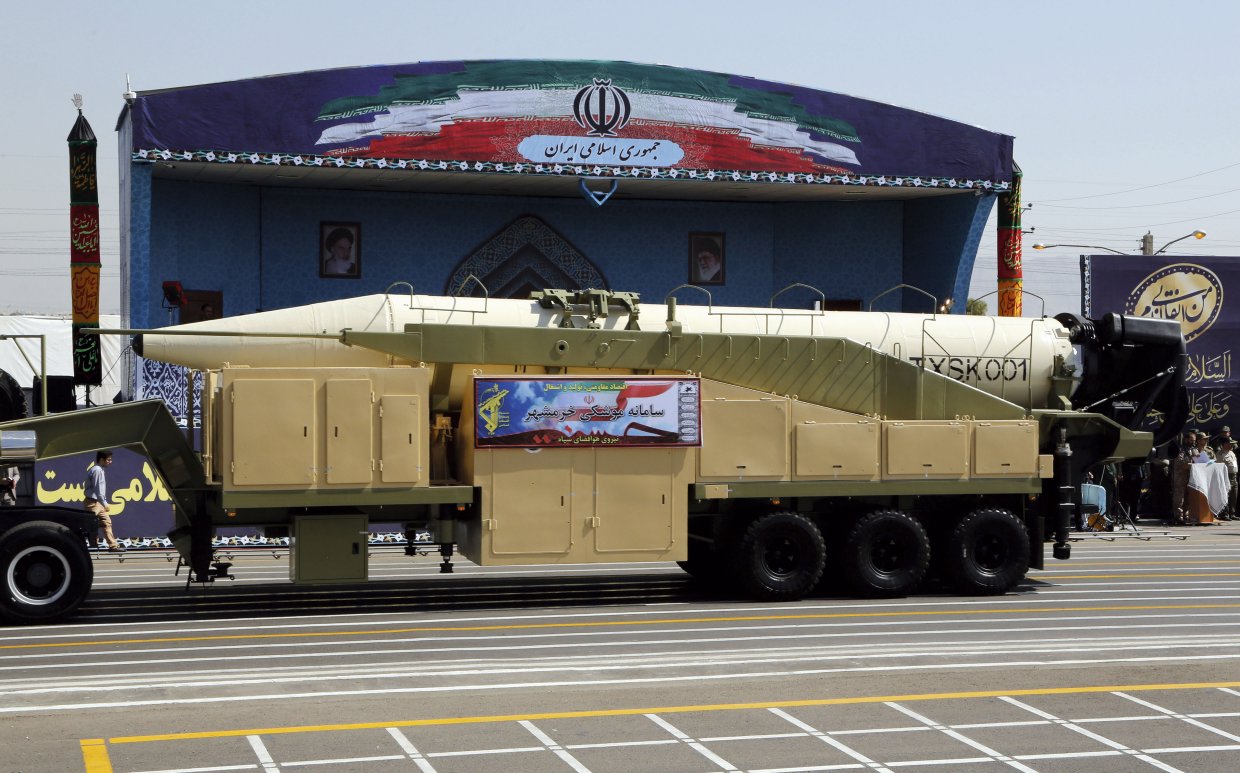 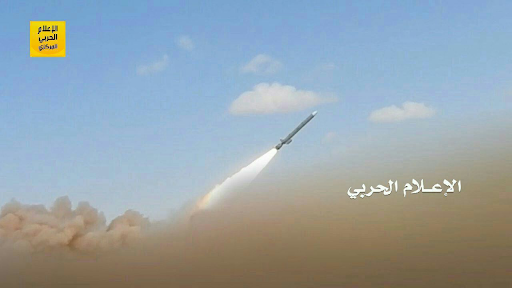